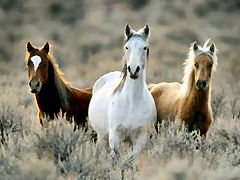 There is a Taoist story of an old farmer who had worked his crops for many years. One day his horse ran away. Upon hearing the news, his neighbors came to visit. "Such bad luck," they said sympathetically.

The next morning the horse returned, bringing with it two other wild horses.

"How wonderful," the neighbors exclaimed!  "Not only did your horse return, but you received two more.  What great fortune you have!"

The following day, his son tried to ride one of the untamed horses, was thrown, and broke his leg. The neighbors again came to offer their sympathy on his misfortune.  "Now your son cannot help you with your farming," they said.  "What terrible luck you have!"

The following week, military officials came to the village to conscript young men into the army. Seeing that the son's leg was broken, they passed him by. The neighbors congratulated the farmer on how well things had turned out.

At first glance, the farmer seems like he doesn't care about anything.  He just shrugs and goes on with his life. This story is deeper than that though.

The old farmer understands that all things change.  Millions of events occur every day, every second actually, without our control.  The farmer simply controls what he can.  He wakes up in the morning, he eats, he works on his farm, he laughs, he talks with friends and neighbors, and at the end of the day he gets a good night's rest.

The farmer has quieted his mind.  He doesn't concern himself with future events because he accepts that change is inevitable.  Sometimes it's change for the better, sometimes it's for the worse, but change will definitely come, and bring with it many events beyond his control. He not only accepts that, he finds peace in it.

The farmer has found the center.